Timeline from AOL:
A section of the Turkish army launched an attempt to unseat President Recep Tayyip Erdogan on Friday night. This is how it unfolded:
July 15, 2016: 19:30 (GMT) – Reports that two major bridges over the Bosphorus in Istanbul are closed, causing major traffic congestion. Army units are seen moving through the city. Images circulate on social media of cars and buses backed up on roads in the city and troops deployed on the Bosphorus Bridge and Fatih Sultan Mehmet Bridge. (see chart below) 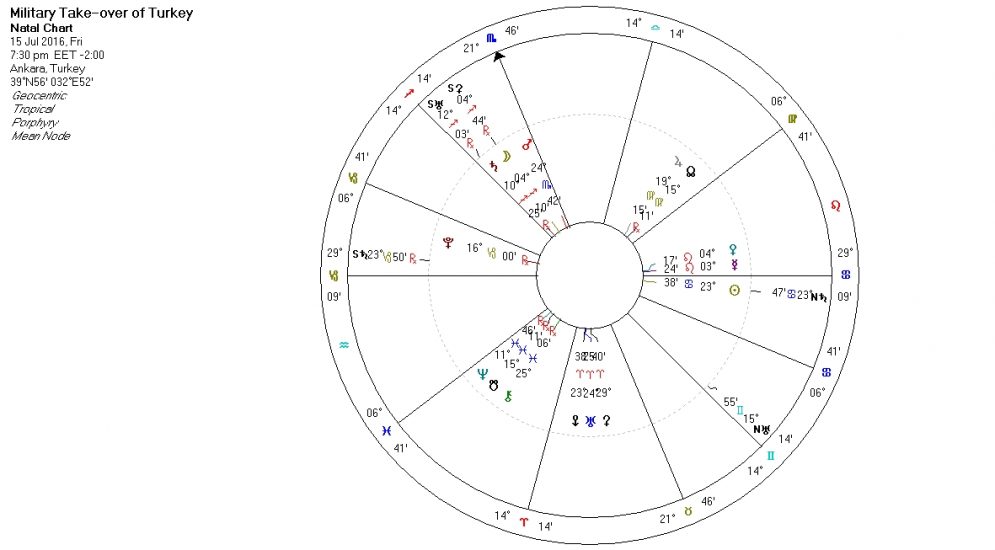 Mars: Transit of Mars retrograde on the MC;

Moon: Transit of Moon in Sagittarius triggered by planetary south node of Ceres;

19:50 – Fighter jets and helicopters are reported in the sky over the capital, Ankara. Helicopters seen over Istanbul. Reports of gunfire in Ankara.
20:00 – Turkish Prime Minister Binali Yildirim announces that unsanctioned “military activity” is under way. He calls for calm and says government forces will “do what is necessary” to restore order.
21:00 – The chief-of-staff of the Turkish military is among hostages held by coup plotters in Ankara, state-run news agency Anadolu reports. A correspondent with Turkish state broadcaster TRT tells the Reuters news agency that troops have stormed the station. 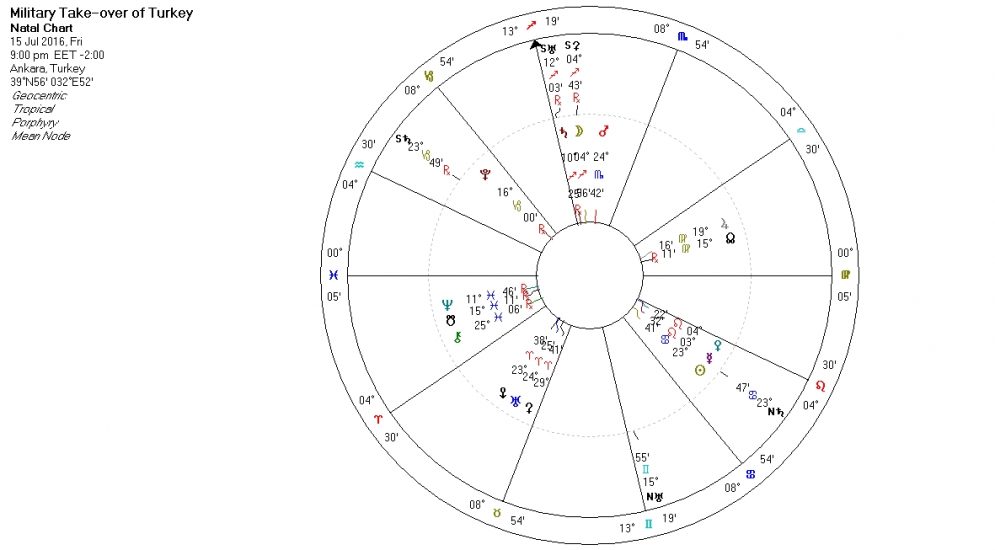 Chart above: set for notice of military take-over of broadcast station (a 9th house archetype) – note Mars, Moon and Saturn now in 9th house – announcements, etc are a 9th house archetype; helicopters and aviation Uranus archetype – note Uranus north node in Sagittarius in 9th conjunct Saturn/Uranus south node in Gemini opposed Saturn (an on-going trigger for terrorism and the violence we have seen in 2016) (9th house and Gemini are also correlations for air traffic matters

21:15 – Statement read on state-owned TRT says military has “completely taken over the administration of the country to reinstate constitutional order”. A new constitution is to be prepared. The statement accuses the government of President Recep Tayyip Erdogan of eroding democracy. A curfew is announced and martial law is to be imposed across the country. The TRT news anchor who read out the statement will later say that she was forced at gunpoint to make the announcement.
21:30 – Turkish PM Yildirim denounces the coup attempt on Twitter, saying the uprising will be suppressed even it it means fatalities. President Erdogan urges the public to take to the streets to protest against the coup. “We will overcome this,” Erdogan says in a video call to a mobile phone held up to a camera by a CNN Turk presenter. The coup plotters will pay a heavy price, he says.
22:00 – Witnesses report that a military helicopter opened fire over Ankara and tanks are deployed at parliament buildings in the city. Explosions are reported and a member of parliament says people are sheltering inside the building. Turkish justice minister says loyalists of US-based preacher Fethullah Gulen are behind the attempted coup.
23:00 – Turkish fighter jet is reported to have shot down a military helicopter used by coup plotters over Ankara. Anadolu news agency reports that 17 police officers killed.

~~
23:50 – Explosions heard in Istanbul. Prime Minister Yildirim says situation under control in the country, and blames supporters of the exiled preacher, Gulen. A US-based organisation linked to Gulen denies any involvement.

00:20 – Erdogan arrives in Istanbul’s Ataturk Airport . Speaking to a crowd of supporters outside the airport, the president says the plotters “have pointed the people’s guns against the people” and their attempt to seize power will fail.
00:30 – Reports of more explosions at parliament buildings in Ankara while troops are reported to have started to surrender in locations in Istanbul. Turkish Interior Minister Efkan Ala says the coup attempt has been “neutralised”. 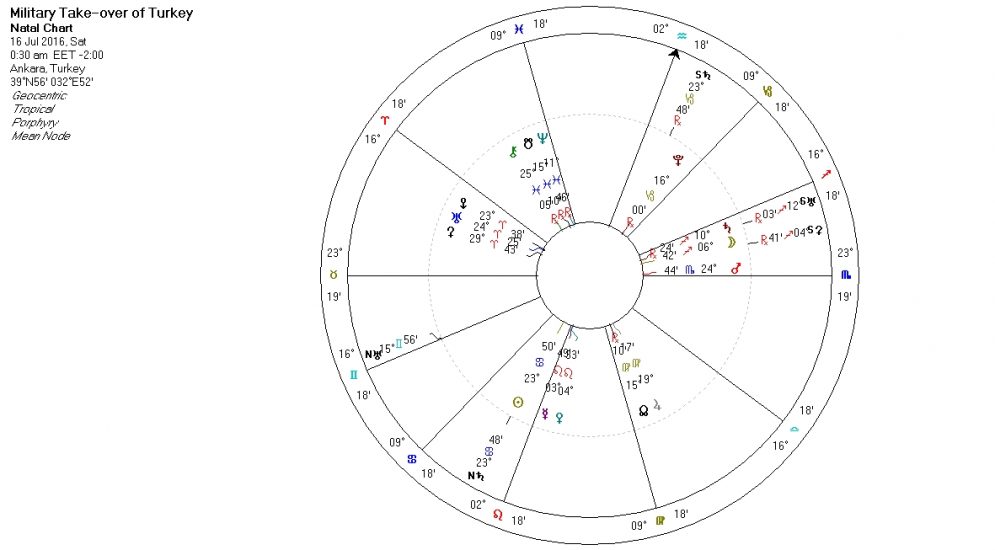 July 16: 00:45 – Soldiers surrender weapons in Istanbul’s central Taksim Square after being surrounded by armed police units loyal to the government.
02:00 – The president’s office says at least 60 people killed and around 130 anti-government forces arrested.
Daybreak – Images are broadcast of scores of troops with arms raised surrendering on a bridge in Istanbul. The government says more than 700 have been arrested and the coup attempt has failed.