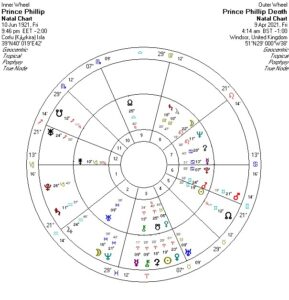 There are many published articles on his life, and television viewers have also gained a glimpse into his character and life through the Netflix series “The Crown”. here is a link for more info on Phillip: https://www.bbc.com/news/uk-11437314

From the Evolutionary Astrology perspective, it is of significance to note the transit of Pluto in Capricorn (outer wheel, first house) in square to Phillip’s natal nodal axis (south node: Aries, 3 house; north node: Libra, 9th house). February 16, 2021  he began a month long hospital stay. (On that specific date, Pluto was in exact aspect to his nodal axis!)

Pluto in Capricorn square the karmic axis (lunar nodes) speaks not only to the actual end to his life (Pluto, death & rebirth archetype; Capricorn, mortality archetype), but also to reaching a critical juncture at the soul level. Phillip has lived a life of duty, a mixture of chosen and required. As the royal consort, he had to give up some personal freedoms and self interests. He was a strong character, raised in the era of “a man’s world”, (male dominance). He was a “man’s man”, driven, proud, impatient, restless, energetic, and tough as nails, yet protocol required that he walked two steps behind his wife, the queen and his monarch. His early life conditioning and natural character was likely not well suited to a ceremonial second fiddle position. The nodal axis across the Aries/Libra axis is indicative of the polarization between the masculine and feminine roles, the karmic learning and growth that is meant to be undertaken regarding the personal and public life experience. From what we know of him, he seemed to express that Aries south node in his private life, as has been said, he was “irrepressibly himself right to the end”.  He could be quite caustic and off putting. When one reporter politely asked “are you well today sir?”, he scowled back  “what’s the matter, don’t I look well?”.

Transiting Pluto is also in opposition to natal Ceres in Cancer (7th house) which is also square the karmic axis.  He takes his leave of this life with the family steeped in crisis after the bombshell Oprah Winfrey interview with Prince Harry & Meghan. That interview had aired only days after Prince Phillip was admitted to hospital for his month long stay. Also, although the matter of Prince Andrew’s dalliances at Jeffrey Epstein’s estate is seemingly swept under the carpet for the present, it is most definitely a deep cut family wound. Additionally, the television series “The Crown” has laid bare many family matters, including Phillip’s early marriage infidelities.

Evolutionary astrology refers to planets in square to the nodal axis as “skipped steps”. They are indicative of the carry over/unfinished work from previous lives. That transiting Pluto is in square at the end of Phillip’s life is indicative of reaching an important evolutionary threshold and turning point. Note also that the transiting lunar nodes are in square to natal Uranus in Pisces (inner wheel 2nd house), and also to natal Jupiter and Saturn in Virgo (inner wheel 8th house).  (Transiting lunar nodes: outer wheel: south node in Sagittarius 11th house; north node in Gemini 5th house).

These transits are suggestive of a major work in progress for Phillip, something that has been approached and advanced in this lifetime but that is not yet complete.