An eclipse can be event generating prior and after they happen. Two eclipses finish the year, Nov 30 delivers an Appulse Lunar Eclipse at 8:18 Gemini. A total Solar Eclipse at 23:08 Sagittarius happens on December 14, the date of the electoral college vote (opposing the Mars position of the USA country chart).  The November 30 lunar eclipse in Gemini falls directly on the horizon line (Ascendant/Descendant) for the USA Chart. The lunar eclipse moon is conjunct USA Uranus in the first house. (USA chart with Nov 30 lunar eclipse below) 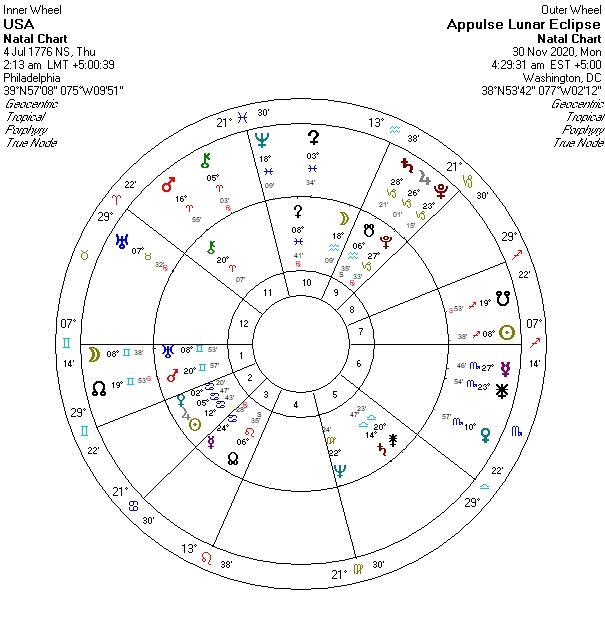 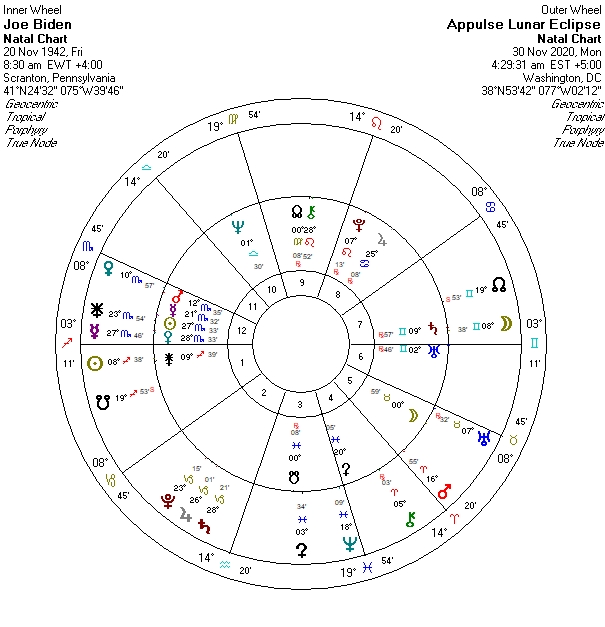 Note how the lunar eclipse falls on Joe Biden’s chart. The eclipse moon is conjunct Biden’s 7th house Saturn retrograde in Gemini and the eclipse sun is conjunct Biden’s 1st house Juno, the karmic contract asteroid. (Could the stimulation on his Saturn retrograde in Gemini put Joe in the White House more than once? Perhaps he is not a first pick for some folk. How will swing voters lean? “better than the alternative”??)
Note the ruler of the lunar eclipse , Mercury, is conjunct Biden’s 12th house Sun (a success indicator).
The transiting nodes for the lunar eclipse (and the Nov 3 election) square Biden’s Ceres in Pisces. This is also a karmic recall, resurrection, or reviving signature. Squares from the transiting nodes set up critical/karmic threshold crossing opportunity.
~~

Here is another fascinating look at how the influence of eclipses extends over a time period: 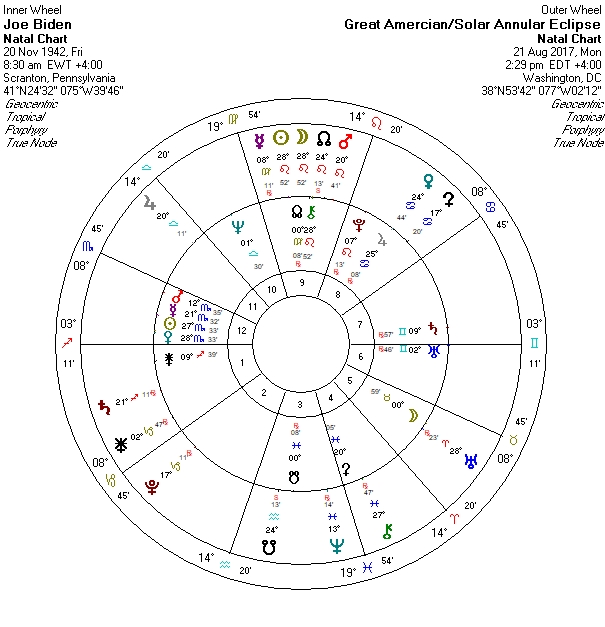 Splitting the country in half, a total solar eclipse cut across the entire USA from coast to coast on Aug 21, 2017. Dubbed the Great American Eclipse, the eclipse sun/moon stimulates Biden’s Chiron in Aries in the 10th house (a maverick, social role model, leader, pioneer, wounded healer). The signature of the total solar eclipse conjunct Biden’s Chiron suggests he “is called” to a new leadership role, one of special destiny in the making.

Note also the position of the solar eclipse Uranus retrograde at 28:23 Aries. The current transit of Mars is re-stimulating that Uranus and will continue to do so to the start of 2021.  This transit suggests the political climate continues on a high charge. 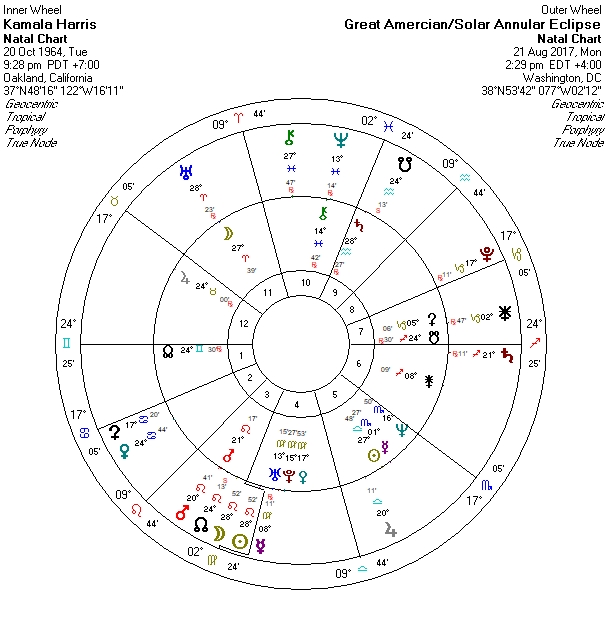 The eclipse Mars is balsamic to her own Mars in Leo (a seeding for the future influence). Mars is the ruler of Kamala’s moon in Aries in the 11th house (a political house; also house of “fortune”). Her Aries moon is triggered by the eclipse Uranus transit, which is now stimulated by the rare Mars in Aries 2020 transit. Eclipse Uranus/Moon is a signature for her pioneering, history making path as the first female and mixed race individual to be run for (and hopefully) hold the second highest political seat in the country.
~~ 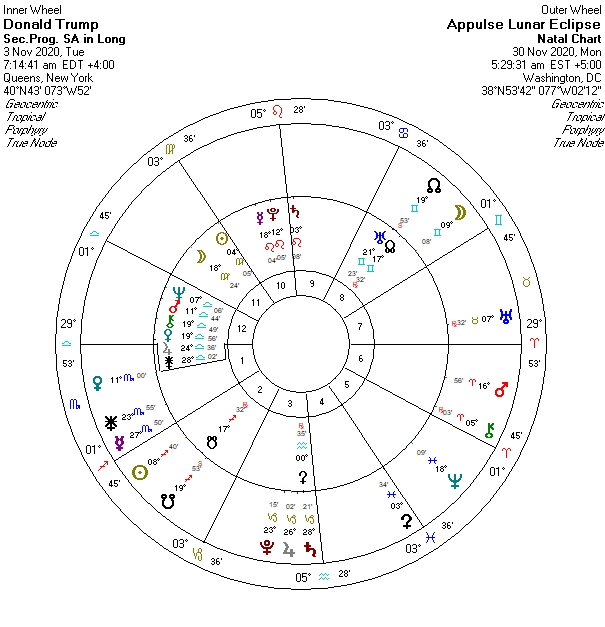 (Let me pause to say this: Neptune square the nodes is a statement for collective consciousness at a crossroads of significance. Please keep in mind that every thought and emotion you have/we have is fed into the super computer called “Consciousness of the Cosmos”. The data is collected, calculated, and then spit out back to us as the reality du jour.) We are the authors of our future. Where do you want to go next? The critical significance of this choice-point time is written in the stars, but it is up to us to steer the ship.)

e left for Donald Trump’s natal chart, with progressed chart (mid wheel) and Nov 30 eclipse (outer wheel). The eclipse moon falls in his natal 10th house (Presidency), eclipse sun in the 4th house (according to a horary interpretation, indicates that Donald is already “in the castle”). Transiting Neptune in his 7th house opposes Donald’s progressed moon in Virgo in the 1st house (an inferior moon, perhaps a “victimized moon”). The transiting nodes (a nodal return for Donald: south node in the 4th house, conjunct his natal 4th; the north node in the 10th, conjunct his natal north node) square Donald’s progressed moon (and as stated above, are in square to Neptune). 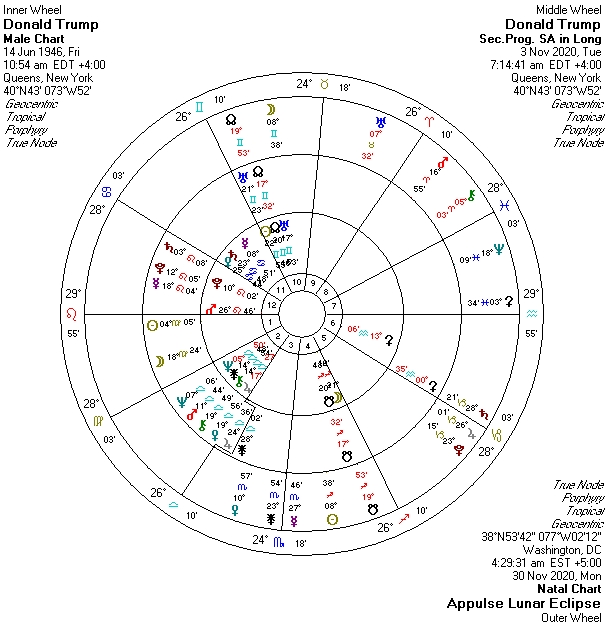 See to the right for Donald’s natal chart with progressions (middle wheel) and the Nov 30 eclipse. (Note the activation takes place in mutable signs in the cardinal houses via the eclipse, transiting Neptune and his progressed moon.)

Mercury ends retrograde in Libra on election day Nov 3 (9:49 am PST). Mercury will maintain a square to Saturn through Nov 6. This suggests that there can be a short delay before the final results are known. (Given that there will be mail in votes to count, this is to be expected.) Note that the election happens only a few days after the full moon in Taurus conjunct Uranus on Oct 31. There’s tension in the air! 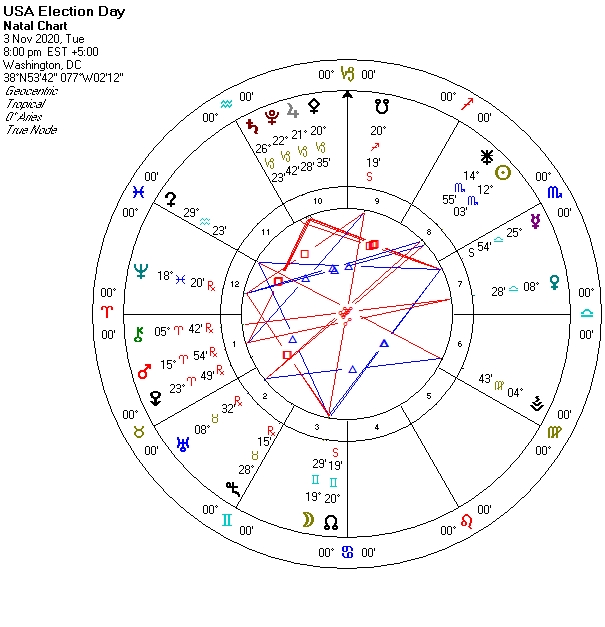 The electoral college vote will happen on the total solar eclipse on Dec 14. Neptune in square to the transiting nodes suggest no matter the result of the Nov 3 election, a degree of uncertainty carries through to the final vote.

The total solar eclipse falls in Donald’s 4th house (he is already “living in the castle”, but Jupiter, ruler of the eclipse is in Donald’s 6th house (a weak or inferior position.) Transiting Chiron in Donald’s 8th house opposes his 2nd house Neptune (a signature of losing ground and or financial loss.) Transiting Venus in Scorpio squares Donald’s Ascendant/Descendant. (In this position, Venus is at crisis/required to give or concede.)

The total solar eclipse falls in Joe Biden’s first house, which is made more favourable by Mercury, ruler of the north node, also in his first house. Jupiter, ruler of the eclipse is in Joe’s second house (an ownership placement). Also note transiting Venus conjunct Juno (karmic contract/soul covenant) is transiting his natal Venus in the 12th house of public service. 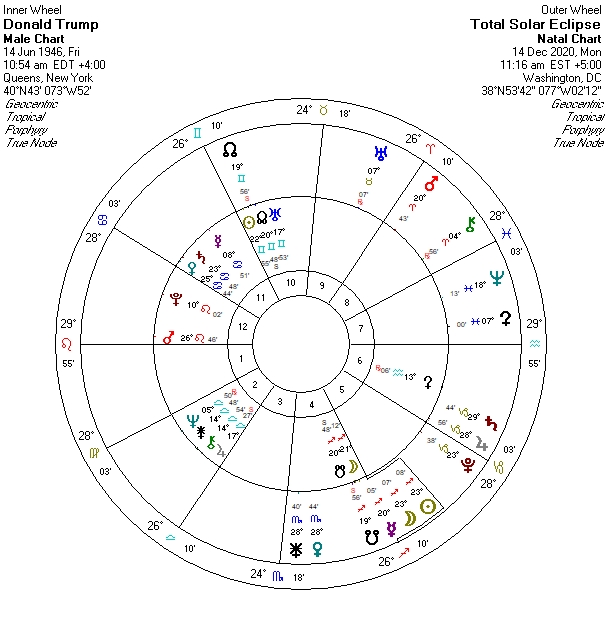 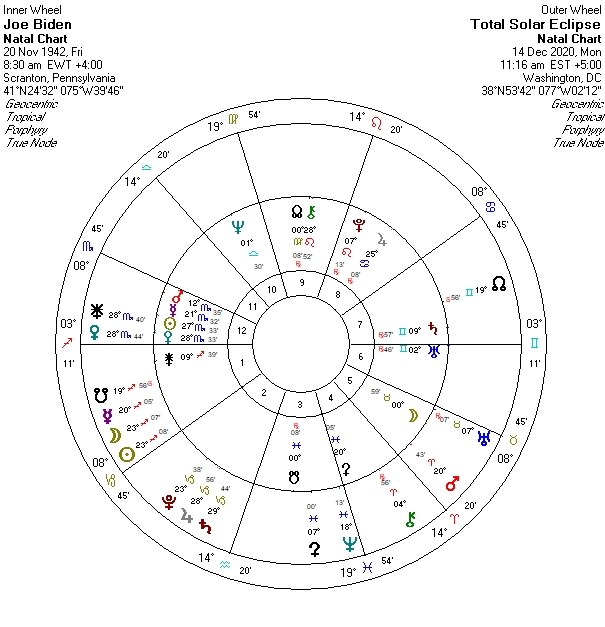 These are just a few of the items that have jumped out for me when studying the eclipses in reference to the election. It is by no means a thorough examination of all the influential transits. I invite you to do your own research.