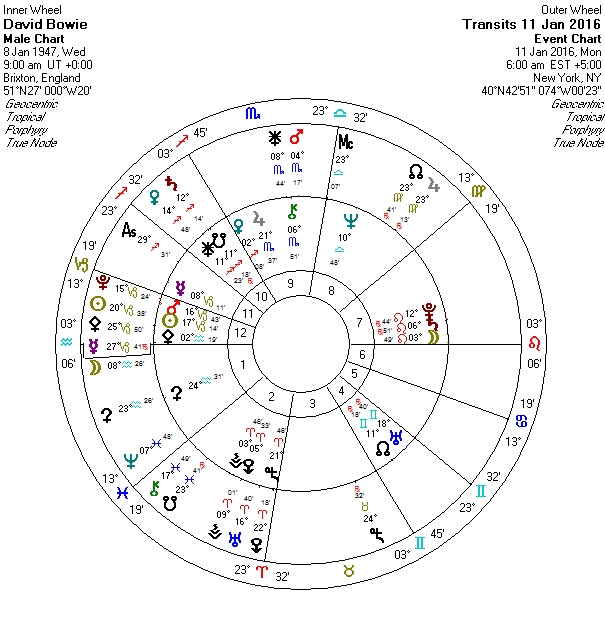 Ashes to Ashes, dust to Stardust…

His first commercial music album success, Space Oditty was released at the same time as the historic moon walk. David Bowie, a cultural, and music legend, one who lived his life and lived his death like a work of art, released his last album, Black Star, on his birthday, just three days before his death (Jan 11, 2016, after an 18-month private battle with cancer. Producing 25 albums over his 40 year career, he thrashed cultural norms; his concerts were often described as perverse and provocative. He donned his sexually ambiguous alter-ego Ziggy Stardust when same sex relationships were still illegal in the UK. He is credited with powering the punk movement. He took themes that were emerging and fused them into art. He took the banal and made it relevant. Apparently he had an avid interest in astrology (not surprising for an Aquarius rising. Astrology was very popular at the time he was launching his career in the 60’s.) He has been described as a genius, a magician, a psychic, an outsider who let others in, the Andy Warhol of Music. When questioned, he said he consciously chose to paint himself into a corner. When interviewed about his continuous (practically yearly) reinvention (also apt for his Aquarius ascendant and moon), he said “it’s really just shirts, different hair colours, and shoes, but the subject matter of what I wrote hasn’t changed in all these years. Centrally it is about isolationism. I’m not sure if its personal, emotional or spiritual, maybe I don’t want to pin it down/know for sure.” He lived in New York but never in the past. When asked if he’d like to be a space tourist, he quipped “I’d rather I’d chew pieces of cement rather than get on a space ship – those buggers are dangerous, they blow up you know; thank you, no, I can see the moon from my window, it’s enough for me.”

Rock legend David Bowie haunts in his video for “Lazarus” from his 25th album “Blackstar” dropping Friday, his 69th birthday.

Playing an agitated patient in a hospital room, the famous eyes — one blue, one brown — are covered with bandages and topped with buttons. He clutches a blanket in the bed.

“I’ve got drama, can’t be stolen,” Bowie sings. “Everybody knows me now.”

Please note the death transit chart is calculated for 6 am, (actual time not recorded). (Aside: David Bowie’s eyes appeared to be two different colours, but in reality they were not. He was injured in a fist fight with a friend in youth and it left permanent damage in one eye – a permanent dilation that gave the appearance of a brown eye. The astrological reference for this different eye is his moon in Aquarius (sun and moon represent the eyes.)

Transiting Saturn in Sagittarius conjunct natal south node (in ancient times, Black Star, name of his last album was used to describe Saturn) & trine natal Pluto. (Rumour has it that he timed his own death – that’s a stretch, but certainly Saturn in Sagittarius trine Pluto in Leo is a good transit for the release of his album and video. It also describes the major attention his death is getting.) Saturn, conjunct the south node is indicative of a completion. (Saturn is an archetype of time, time spans, endings and end of life).

Transiting Pluto in Capricorn conjunct natal Mars in the 12th: Pluto has been in aspect to this natal Mars since he was first diagnosed with cancer 18 months ago. Befittingly for the 12th house influence, he kept his condition secret, many who were close to him were shocked (transiting moon in Aquarius, natal moon in Aquarius) to learn of his transition.

Transiting Mars in Scorpio conjunct Chiron in the 9th house: “gone but not done”, something remains behind (a legacy, a career, a statement of life and mortality). Chiron is always of influence during major life events. The 9th house (the archetype of Sagittarius) is a house of long journeys; (Jupiter and/or Sagittarius are often a feature of a transition.) Scorpio is an archetype of death, rebirth and reincarnation. This transit is also befitting for his last song/video: Lazarus, a haunting video showing Bowie struggling in a hospital bed.

Transiting moon had just passed over (conjunct) transiting Mercury retrograde in Capricorn, indicative of a key event or key person (a messenger/writer/spokesperson), a culmination and another indication of unfinished business/life after death (alluding to the release of his album and career that lives on.)

Transiting moon had likely advanced into Aquarius which describes the public shock wave in learning of his death. (actual time unknown; some suggestion that he died on Jan 10 not 11). Transiting moon opposition to natal moon and natal Saturn (culmination; public response; final project/album release;)

Transiting Ceres in Aquarius in balsamic aspect (culminating on) natal Ceres, another reincarnation/life after death transit. Transiting Ceres had just surpassed a dynamic aspect (1/4 square) to Jupiter (as discussed above, this transit describes the momentum of transition – moving from the physical plane (2nd house) to the pure energy plane – Aquarius & 9th house journey beyond the physical.) This Ceres/Jupiter square aspect also provides great energy/attention to the album release. (9th house is a marketing house; the transit is an astute and visionary aspect.)

See chart below (not shown in above chart):

Progressed Moon position at 6:24 Aquarius in his 1st house opposes his natal Saturn at 6:51 Leo retrograde

Progressed Mercury is retrograde at 9:59 Pisces conjunct progressed Mars at 10:48 Pisces (both in his 1st house); both are square the natal karmic/nodal axis (N Node 11:18 Gemini ; South Node 11: 18 Sagittarius). This skipped step to the mutual sign axis of Gemini/Sagittarius is appropriate for a transition, for the release of the album (Gemini/Sagittarius -recording/video release; publishing/broadcasting) and speaks both of “I live on, and I’ll be back”. 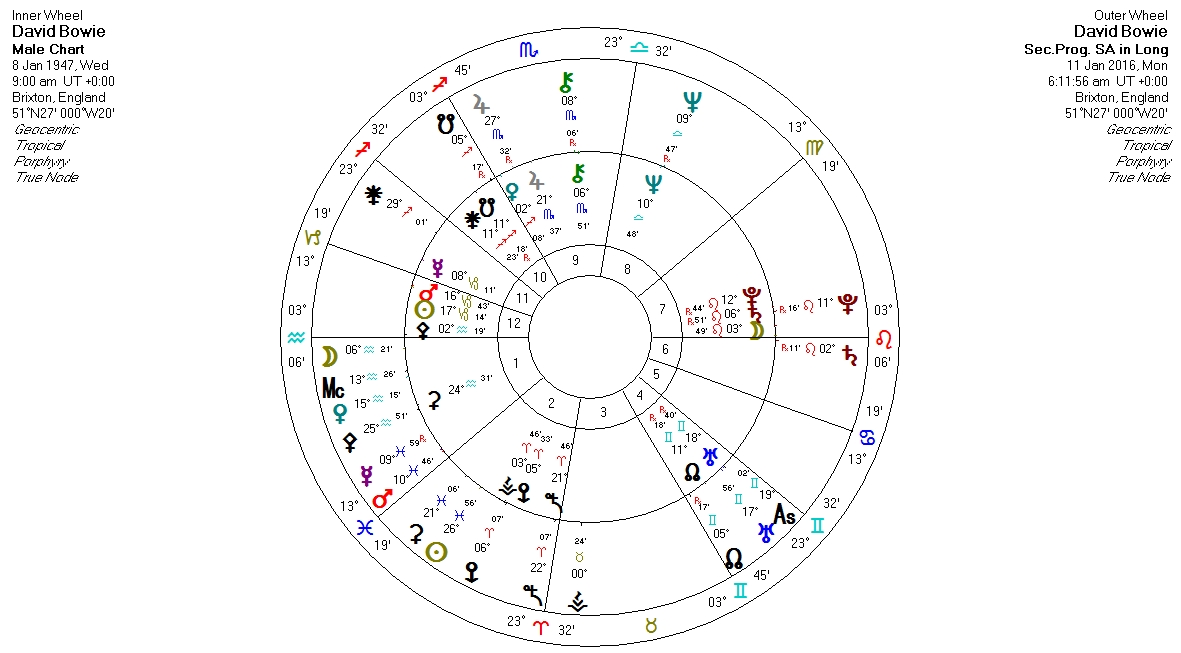