Why did Justin Trudeau choose October 17 for the start of legalized recreational cannabis?
Could it in recognition of Canadian singer/song writer Gord Downie, (Tragically Hip Front Man, activist), who died on this date one year ago from Glioblastoma, (brain cancer).

I think this is Trudeau’s nod to Gord Downie for his work in bringing attention to truth and reconciliation for the indigenous peoples of Canada. The same year that Downie was diagnosed with an inoperable brain tumour he released Secret Path, an album about Chanie Wenjack, a 12-year-old Ojibwa boy who died trying to walk home after escaping a northern Ontario residential school. He never got there. In addition to Juno awards, Secret Path also won accolades from Indigenous communities for shedding light on the legacy of residential schools and racism in Canada.

The project was widely adopted by many Canadian schools as a teaching tool in indigenous history lessons on the residential school system, and led to the creation of the Gord Downie and Chanie Wenjack Fund to support efforts in indigenous reconciliation. 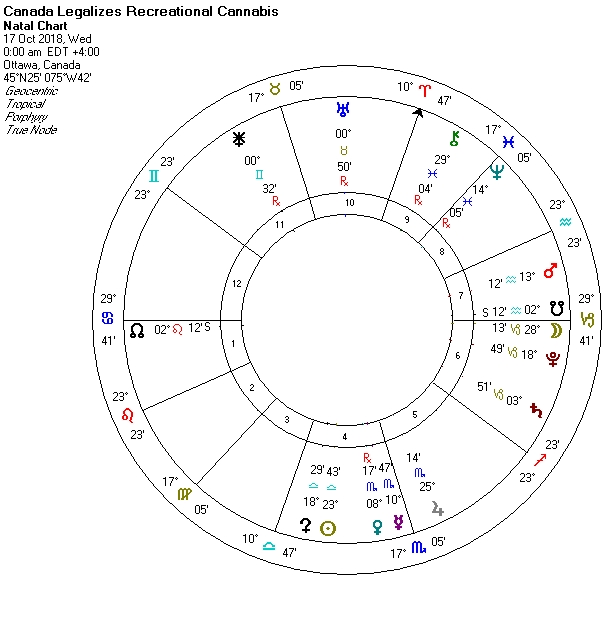 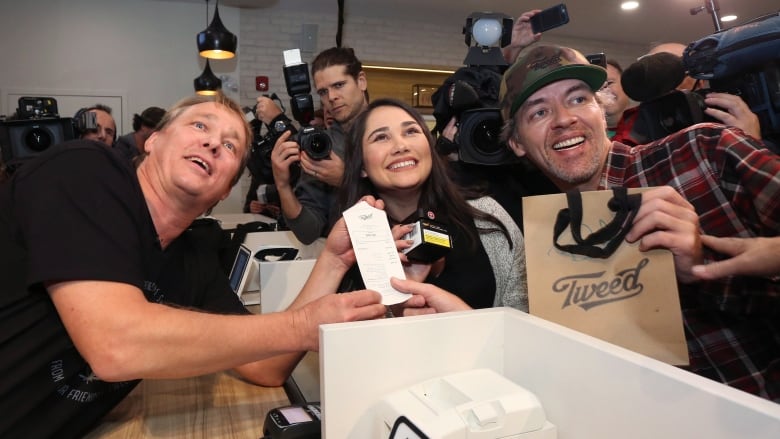 Canopy Growth CEO Bruce Linton, left, poses with the receipt for the first legal cannabis for recreation use sold to Nikki Rose, centre, and Ian Power at the Tweed shop in downtown St. John’s at 12:01 am NT on Wednesday. (Paul Daly/Canadian Press)

The first legal recreational cannabis has officially been sold in Canada.

In Newfoundland and parts of Labrador, midnight comes earlier than anywhere else in the country, and people were ready and waiting for marijuana to be sold to them over the counter.

At the Tweed retail location on Water Street in downtown St. John’s, the first sales went to Ian Power and Nikki Rose, who lined up outside hours before.

The lineup at the Tweed store started at around 8 p.m. NT, and steadily grew as the time ticked down to 12 a.m.

Ian Power said he came early so he could “make history.”

“It’s been my dream to be the first person to buy the first legal gram of cannabis in Canada, and here I finally am,” Power said. 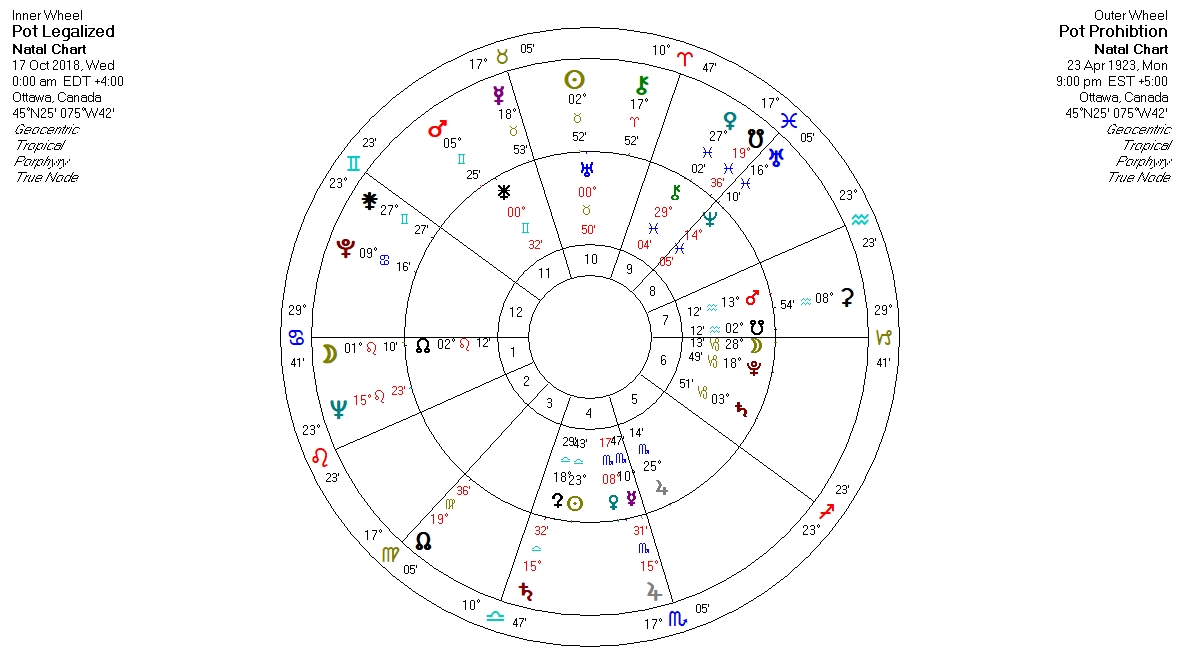 Prohibition in 1923:
Cannabis was added to Canada’s Confidential Restricted List in 1923 under the Narcotics Drug Act Amendment Bill after a vague reference to a “new drug” during a late night session of the House of Commons on April 23, 1923. More specifically, the government introduced the Act to Prohibit the Improper Use of Opium and other Drugs; this was a consolidation of other legislation but now listed three new drugs, including marijuana. (excerpt from wikipedia, legal history of cannabis in Canada).
Prohibition was set in place to control morality and the dark market (primarily opium, mainly brought into the country by Chinese immigrants) The end of prohibition takes places with Venus in Scorpio retrograde, partially in an attempt to squash the black market (Scorpio). When prohibition was set in place, Cannabis was not widely popularized as it is now.

Brief Chart Analysis for the Canadian Legalization of Cannabis, Oct 17, 2018:
Setting the time of legalization at 0:00 am October 17, 2018 gives an Ascendant at 29:41 Cancer (culminating/anaretic degree). The anaretic degree can be indicative of a sense of rushing into something. Critics have complained that the government pushed legalization forward before the provinces were ready. The archetype of a culmination phase is one of completion of the past and seeding for the future. Cancer/Capricorn situated on the horizon line (Ascendant/Descendant) is indicative of the past and its relevancy to the present and future. This Cancer/Capricorn Angularity speaks of the end of a lengthy prohibition. (Canada made pot an illegal substance on April 23, 1923.)

Ruler of the Ascendant, the moon, is in the 6th house at 28:13 Capricorn. Situated at the last degree of the house, the moon is in a weak chart position, which suggests the government, the business, the system, the regulation, control, and the timing is of issue. Some would say that legalization of recreational pot is long overdue. The moon in Capricorn describes the government in the business. It also is indicative of the slow process of approving licences. Many dispensaries have had to temporary (Venus retrograde) close shop while they wait for the piece of paper that will prevent them from hefty fines or being shut down for good. In this regard, law enforcement in BC says they are not looking to pounce, where law enforcement in Ontario is holding to the hard-line. Will the demand exceed the supply? On the first day of business, retailers are voicing this concern.

Will the legalization impact the black market? With Venus in Scorpio and retrograde, there is a suggestion that the legalization may have some effect on the black market, but Venus is in square relationship to the north and south nodes, which suggests that both the private/independent and public/business sectors remain active. Note also that Uranus retrograde in Taurus is disposited by Venus and is also square the nodes too. Uranus suggests entrepreneurial enterprises hold yet untapped potential and profit. The north node in Leo speaks to the recreational aspect. The south node in Aquarius to the science end and to the social climate and public opinion (which is varied.) Uranus retrograde and square the nodes also suggests that there is more to come from the science of cannabis.

The government is introducing legislation to pardon those with prior convictions for possession of small amounts (30 grams or less, which is now the legal amount) so long as the sentence has been completed. They are also waiving the fees for applying for the pardon. This is indicative of Mercury in Scorpio conjunct Venus retrograde. Moon in Capricorn has plenty of work yet to do. Ontario premiere Doug Ford is complaining that there are not enough devices for police to check regarding impaired drivers.

Mercury in Scorpio conjunct Venus retrograde in Scorpio could be a hidden message signature. Mercury can represent a key person, Scorpio perhaps one that is no longer with us. As suggested previous, perhaps Justin Trudeau picked October 17, the one-year anniversary of Gord Downie’s death, to acknowledge the contribution he made through social activism. (see above.)

When Cannabis was made illegal in 1923, it was not so much in the public eye as was opium. Today, our real issue is heroin and fentanyl. (Venus in Scorpio; Mercury in Scorpio.)

From Wikipedia:
Cannabis was added to the Confidential Restricted List in 1923 under the Narcotics Drug Act Amendment Bill after a vague reference to a “new drug” during a late-night session of the House of Commons on April 23, 1923. More specifically, the government introduced the Act to Prohibit the Improper Use of Opium and other Drugs; this was a consolidation of other legislation but now listed three new drugs, including marijuana.

Historians often point to the 1922 publication of Emily Murphy’s The Black Candle (which was reprinted in 1973) as the inspiration for the addition of the three extra drugs. Murphy was a suffragist and police magistrate who wrote a series of articles in Maclean’s magazine under the pen-name “Janey Canuck”, which formed the basis of her book. She used numerous anecdotes culled mostly from anti-drug reformers and police to make her arguments, which make strong links between drugs and race and the threat this poses to white women. She claimed that a ring of immigrants from other countries, particularly China, would corrupt the white race. “It is hardly credible that the average Chinese peddler has any definite idea in his mind of bringing about the downfall of the white race, his swaying motive being probably that of greed, but in the hands of his superiors, he may become a powerful instrument to that end.”

Although Murphy’s anti-drug screeds were widely read and helped spread the drug panic across the country, historian Catharine Carstairs disputes that the 7-page chapter, Marahuana — a new menace in Murphy’s book inspired the inclusion of cannabis on Canada’s restricted substance list. Specifically, Murphy was not respected by the Division of Narcotic Control because of the creative liberties she took in presenting research they had assisted her with. According to Carstairs, “There were insinuations in the records that the bureaucrats at the division of narcotic control did not think very highly of Emily Murphy and did not pay attention to what she was writing about, and they didn’t consider her a particularly accurate or valuable source.”

More likely, cannabis was added to the list because of Canadian involvement in international conferences where it was discussed. According to one government official, cannabis was outlawed after the Director of the Federal Division of Narcotic Control returned from League of Nations meetings where the international control of the drug was broached. Cannabis did not begin to attract official attention in Canada until the latter 1930s. The first seizure of cannabis by Canadian police was not until 1937. Between 1946 and 1961, cannabis accounted for 2% of all drug arrests in Canada.